This tutorial explains how to implement an addin that extends the project pad. The idea for this extension is to be able to show the classes that are implemented in a file as child nodes of that file in the project pad. Something like this: 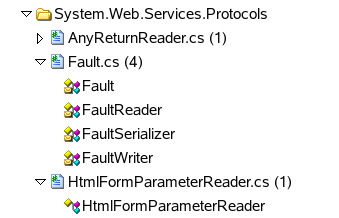 Classes are shown as child nodes of the file, and the file label has been extended to include the number of classes (which is not really useful, but this is just an example).

First of all, I’ll explain how the project pad is defined in the core addin XML file. It looks like this:

The solution pad creates the tree of nodes by following several steps:

Node builder classes must inherit either from TypeNodeBuilder or NodeBuilderExtension, depending on whether we want to implement a node builder for a new data type, or we want to extend existing builders.

Creating a NodeBuilderExtension for project files

The FileClassExtension class implements the node builder that extends the ProjectFile’s builder chain. This class inherits from NodeBuilderExtension, and the only method that is mandatory to override is CanBuildNode(). This method is called by the solution pad to determine if a builder must be added to the builder chain of a given type. This is the first method that we’ll implement:

The dataType parameter is the type to be checked, and the method must return true if the builder can build nodes for this data type. The FileClassExtension builder is only interested in ProjectFile objects, so it only returns true for ProjectFile classes (or subclasses).

Notice that a node builder extension can return true for more than one data type, which means that it will be added to the builder chain of all those data types.

The BuildNode() method is called sequentially for all node builders in a chain to get the icon and the text of the node being created. It has the following signature:

The dataObject parameter is the object for which the node is being built. nodeInfo has several properties that can be used to set the content and style of the node. Those properties are:

I’ll talk about the builder parameter in a minute.

The sample extension overrides this method and extends the label to include the number of classes inside the file:

In order to create the child nodes of a tree node, another method is called: BuildChildNodes(). The reason for splitting the node creation in two methods is that the tree is lazily created, that is, the children of a node won’t be created until that node is expanded. This saves a lot of resources and time for trees with a large number of nodes (see for example the class pad).

The BuildChildNodes method in the sample extension can be implemented like this:

Like BuildNode(), this BuildChildNodes() has a dataObject parameter which is the object for which the child nodes are being created. The builder parameter is an object that implements the ITreeBuilder interface and provides several methods for adding, removing and updating tree nodes. Right now we are only interested in adding child nodes, and we can use the AddChild() method for that.

Notice that we are not dealing with TreeIters, and tree stores here. We always deal with data objects. When we call AddChild(c) we are adding a new object to the solution pad, and it is the responsibility of the solution pad to find a builder chain for that object and create the node in the tree store. Of course, it is our responsibility to provide a node builder for that data type (we’ll do that later on).

We need to implement one more method in our FileClassExtension class: the HasChildNodes() method. This method has the same parameters as BuildChildNodes() but it just has to return true if the node being built has children. This method is used by the solution pad to check if it has to show the expand arrow or not (remember, the tree is lazily created). The implementation is very simple:

There is another method that is called when building a tree node: GetNodeAttributes. It can be override to return some attributes for the node. Right now there are only two attributes: NodeAttributes.Hidden, to avoid showing the node in the tree, and NodeAttributes.AllowRename, to enable node renaming.

We want to make this new “Show classes inside files” feature optional, so the user can choose whether to show or not the classes by clicking on a checkbox menu option in the contextual menu.

All management of the options (which includes creating the menu option, enabling/disabling the option and updating the tree) is automatically handled by the solution pad. The node builder only needs to check whether the option is enabled or not when building the node. This is the complete FileClassExtension class with support for options:

Keeping up to date with data changes

We are almost done with FileClassExtension, but to complete it, we need to make it aware of data changes. This means that when a class is added to a file, it should show the new class as a child of the file node, or it should remove it if the class has been deleted.

In the new solution pad, the Remove command would only remove the ProjectFile from the Project. It can’t remove the tree node because it is not a node builder, and has no access to a ITreeBuilder object. It is the responsibility of the Project node builder to subscribe the FileRemovedFromProject event, and update the tree when that event is raised. In this way, the tree is always in sync with the real list of files, it doesn’t matter where and when it is modified.

In the FileClassExtension sample, we need to update the tree when the class information about the file changes. We can do it by subscribing the ClassInformationChanged event provided by the parser service:

Initialize() and Dispose are fine for global events, but sometimes you’ll need to subscribe to events which are raised by the data objects being added to the tree. In this case, you can use the OnNodeAdded and OnNodeRemoved methods. The OnNodeAdded is called when an object which is handled by this node builder is added to the tree, and OnNodeRemoved when it is removed. For example, the builder for Project nodes in the project pad subscribes to the project’s NameChanged in this method.

OK, the FileClassExtension class is ready. The complete code can be found in fileclassextension.cs.

Creating a TypeNodeBuilder for the IClass objects

We need to create a new node builder for IClass objects. It will be a TypeNodeBuilder subclass because we are creating a new node type, not extending an existing one. This class is more simple than the FileClassExtension, so I’ll show the full code at one time:

To handle user actions such as item activation, we need to create a new class, which must inherit from NodeCommandHandler. This class has several overridable methods that are called for common user actions:

For our sample extension, we’ll override the ActivateItem method, and will open the file where the class is implemented:

For example, to get the project to which the IClass object belong, we could do the following:

although this particular example can be simplified using the GetParentDataItem() method:

This call will return the closest Project data object in the path to the root node. The second parameter is to specify that the current node should not be included in the search.

ITreeNavigator has many other methods that can be used to navigate the tree: MoveNext, MoveToChild, MoveToRoot, and so on. It also offers properties such as Selected, Expanded, NodeName and of course DataItem, which returns the data object bound to the tree node.

Once the new class node is showing up in the project pad, the next step is to create a context menu for the node. Just to show how it works, we’ll add a “Properties” menu option which will show a message box with some information about the class.

The command can be implemented in the ClassCommandHandler class we defined above. We first need to create the enumeration value that identifies the command, and then we add a command handler for that command:

Once we have the command implemented, we need to show it in the context menu. There are two ways of doing it: by extending the existing project pad context menu, or by creating a brand new context menu.

The first and easiest option is to extend the existing context menu definition of the project pad. All we have to do is to add a new extension:

The Condition element is required here to ensure that the new option is only shown for objects that implement the IClass interface (the value of the condition has to be the full name of the type).

The second option is to define a new menu. If we are implementing a new node type using TypeNodeBuilder, we can specify the menu’s addin extension path for this type of node by overriding the ContextMenuAddinPath property. Just to show how it works, we’ll add a “Properties” menu option which will show a message box with some information about the class:

In the addin xml file we define the new menu. In this case it will have a single option:

The final step is to tell MD to include the our new node builders to the project pad. We also need to register the new ShowFileClasses option, so it is included in the contextual menu. The addin XML file would look like this:

The complete xml file can be found in sampleprojectpadextension.xml.

This is the source code of the sample:

A tarball with the complete sample can be downloaded from here. If you want to compile it, beware that you’ll need to add a new reference to your local MonoDevelop.Base.dll assembly to the project.

Once compiled, just put the dll and the xml file into the AddIns folder, and restart MonoDevelop.