A refactory in MonoDevelop inherits from the abstract Refactoring class. A refactoring basically does: 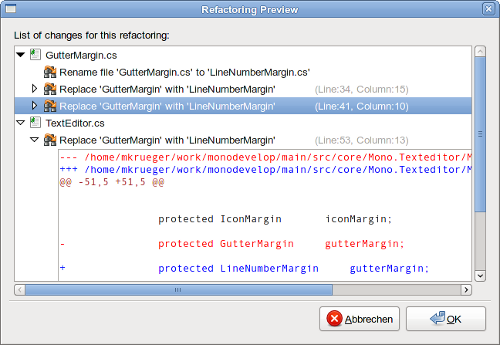 The preview dialog lists all source code changes step by step in human readable form and a diff can be shown for each step, if it changes the source code. (a file rename/remove has no diff)

If a refactoring has no options then just the preview dialog should be showed to let the user know what will change in it’s source.

Refactorings should inherit from the RefactoringOperation base class.

If IsValid is true a menu command is created (using GetMenuDescription) when the item is clicked the Run method is executed. The <Run method simply runs PerformChanges and executes them. If a dialog should be shown this method needs to be overwritten. What it’s important is that the refactorings only require the RefactoringOptions class. This class contains:

Currently RefactoryCommands creates two different menus one that contains refactoring operations that work on a part of text - like “extract method” and one that works on a specfic object like “rename”. For the item specific menu the selected item property is set.

MonoDevelop is a cross language development environment and refactorings need to support such environments. If a refactoring is implemented it needs to handle cross-language solutions. For the first approach it is enough to inform the user, if the refactoring can’t be performed for all projects that may be affected.

Adding new languages to the refactoring system should be as easy as possible. It requires the implementation of the IRefactorer, INRefactoryASTProvider and IResolver interface. If these interfaces are not available the refactorings are not being executed.