MonoDevelop 6.0 introduces a new Project Model. The Project Model is a model of classes that implement the functionality of loading, saving, building and doing all kind of operations on projects.

The old project model was designed with several layers of abstraction, so that the same model could be used to support different file formats for the same kind of project. This allowed, for example, supporting a native format (.mdp) while migrating to MSBuild. The drawback of this approach is that the abstraction layer required to support this model makes it hard to introduce format specific features.

The new project model has less abstraction layers and is more focused to MSBuild. From the outside, the project model API is very similar. The class hierarchy is more simple in some cases, and some methods change a bit, but in general it is the same. However, on the inside there are many changes. The file format abstraction is gone, and the extension model has been completely revamped. Also, the new API takes advantage of async.

The following UML diagram is a simplified view of the project model: 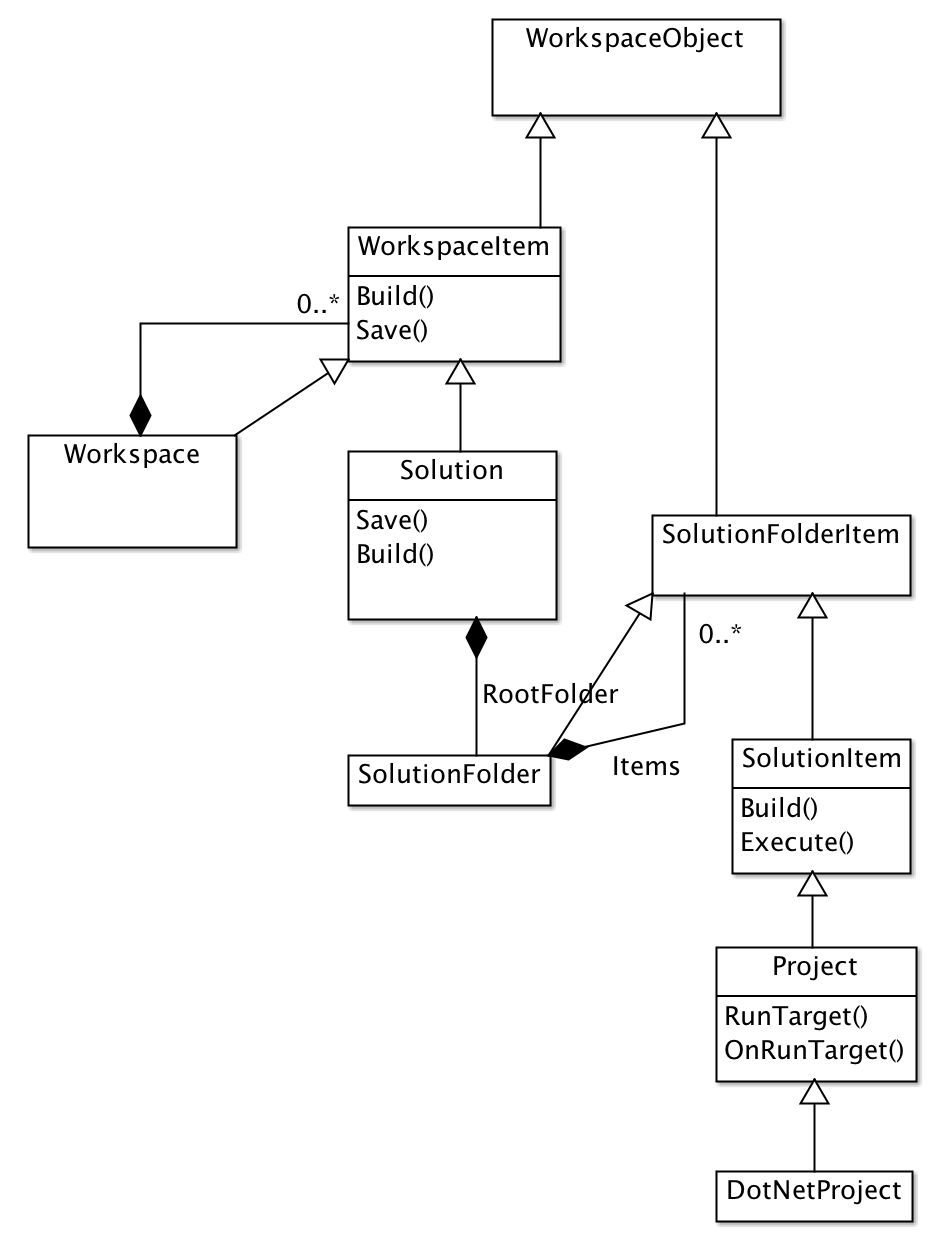 This model is not very different from the old model, although the semantics are a bit different in some cases.

The most important classes are:

There are two ways of extending the project model: by subclassing an existing class or by creating an object extension.

Subclassing allows creating new classes based on existing project model classes. For example, to add support for a new language you would subclass the Project class and implement the methods for building and executing the project.

On the other hand, object extensions allow overriding the behavior of an existing project model class. Extensions can perform custom operations that can be executed before, after or in replacement of a project model object operation. Any subclass of WorkspaceObject can be extended using object extensions. For example, iOS support is implemented with an extension object that implements custom build and execution logic for the existing C# project class.

Project flavors are a special case of object extensions. A project flavor is an extension for objects of type Project, and it is identified by a GUID.

By subclassing the project model and creating object extensions it is possible to extend the project model in many different ways, such as adding support for new languages, new frameworks or new project types.

Support for new types of projects can be added by subclassing SolutionItem or any of its subclasses: 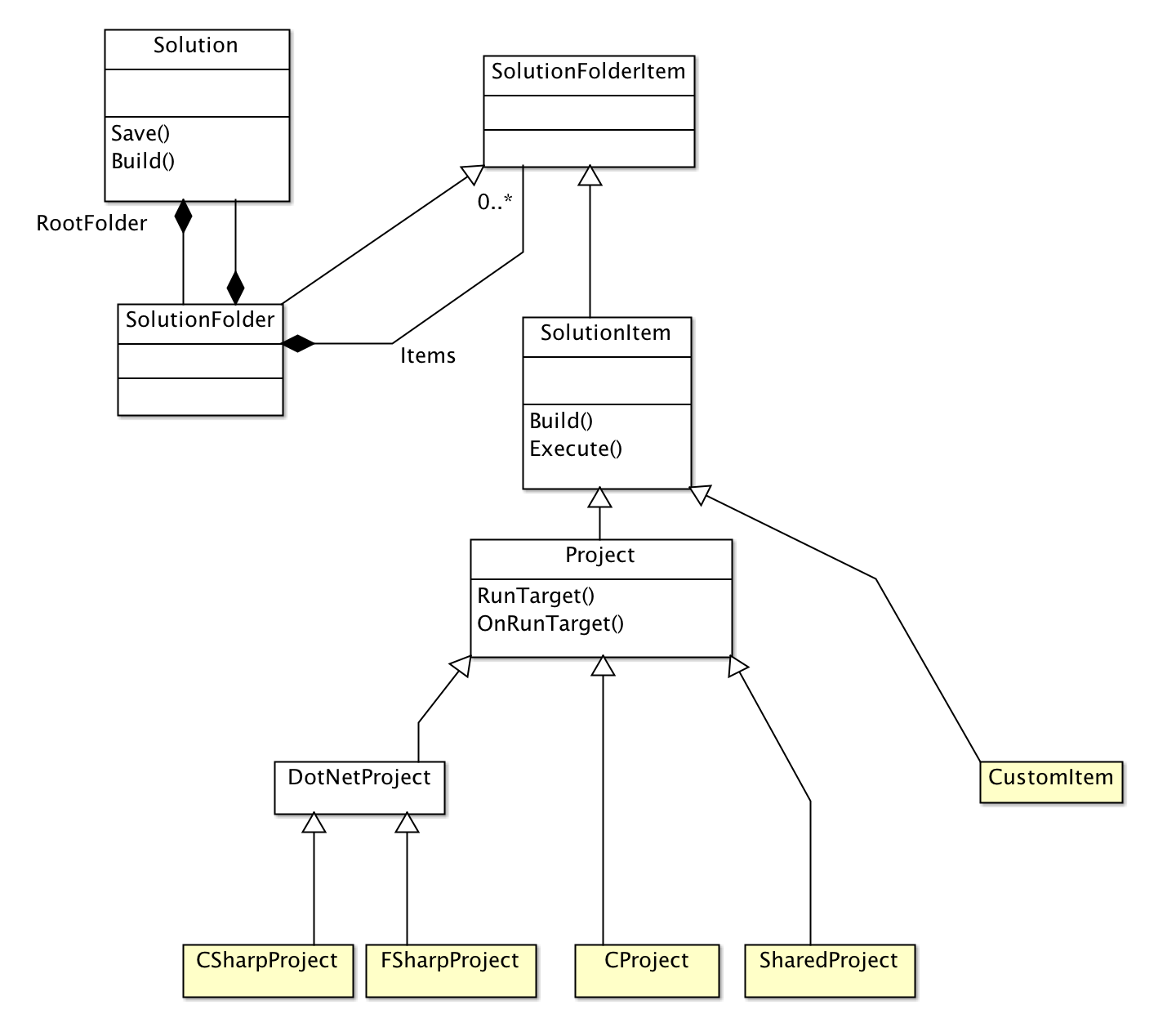 All Project Model classes have virtual methods that can be overriden to provide custom behavior.

Once a class is implemented, it needs to be registered. New project types must be registered in the MonoDevelop/ProjectModel/MSBuildItemTypes extension point, and there are 3 types of extensions you can register:

The SolutionItemType extension node can be used to register any kind of solution item that is not based on MSBuild. For example:

The available attributes are:

The ProjectType extension node can be used to register any Project subclass. For example:

The node takes the same attributes as the SolutionItemType extension node, with one addition:

The DotNetProjectType extension node can be used to register a class that implements support for a new language. For example:

The node takes the same attributes as the SolutionItemType extension node, with one change:

When loading a project, the project service checks the file extension to find the type that has to be instantiated for the file. That’s why the extension is provided when registering the item type. However, in cases when the file extension is not enough to determine the item type, it is possible to specify a SolutionItemFactory, which can implement some logic that checks the project file and creates the correct instance.

The SolutionItemFactory type is specified in the type attribute, for example: 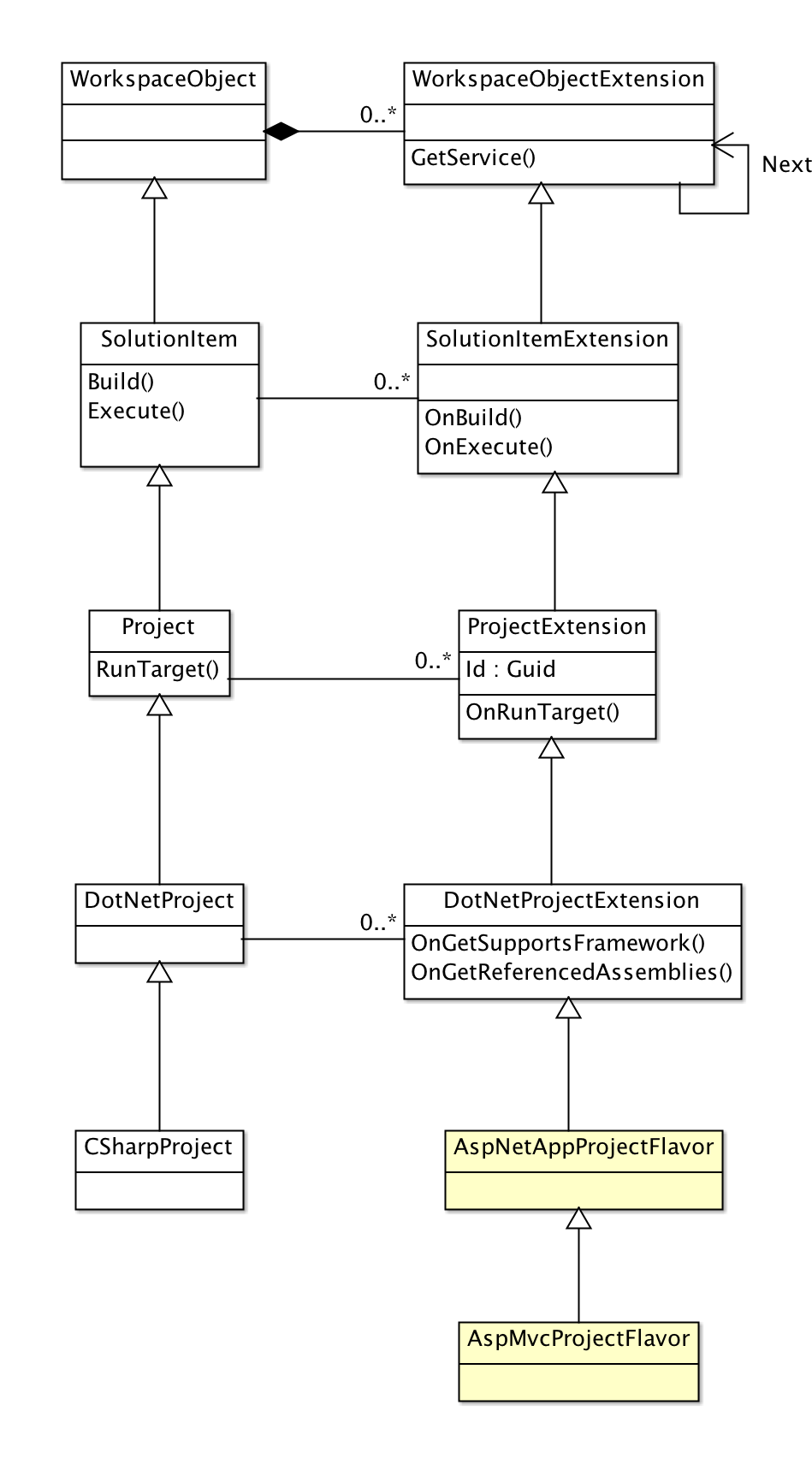 Some information about those classes:

The following diagram shows how method calls flow through the extension chain: 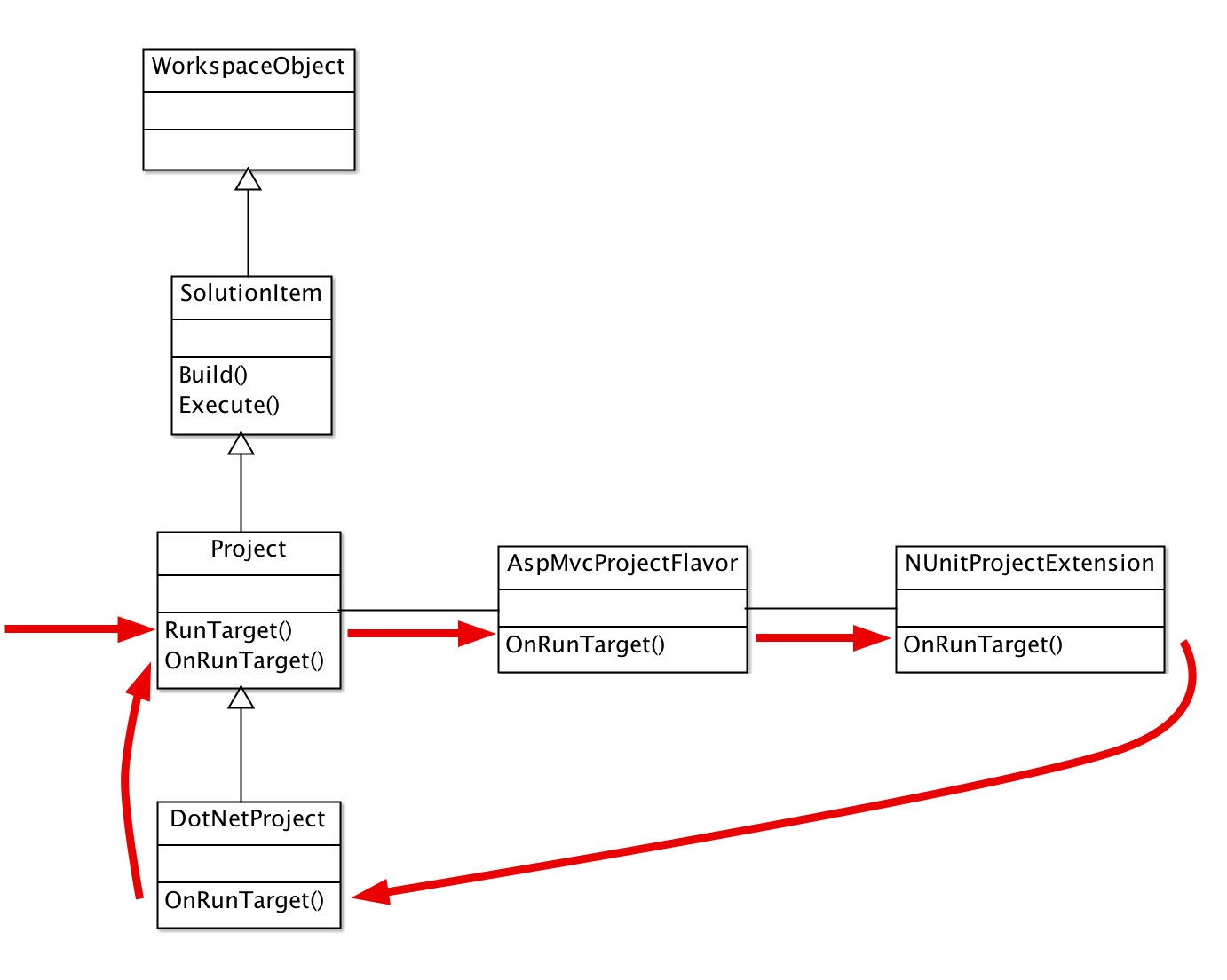 Methods overriden in extensions are called first, so they have the first chance of customizing the behavior. The default implementation of the virtual method will invoke the override in next extension, and finally on the model object class (Project in this example), which can also be overriden in subclasses (such as DotNetProject in this example).

Extension types must be registered in the /MonoDevelop/ProjectModel/ProjectModelExtensions extension point, using the Class node. For example:

Extensions that are project flavors must be registered using the ProjectFlavor node:

The following attributes must be supplied when registering a project flavor:

When registering a flavor type it is possible to specify a Migration Handler. This is useful for example when a project flavor is being made obsolete in favor of a new flavor.

The following attributes can be used to specify a migration handler:

In general, Project Model objects implement their own serialization. For example, the SolutionItem class has OnLoad() and OnSave() methods that are invoked to load and store instances. Subclasses of SolutionItem such as Project have a default serialization infrastructure, and provide more specialized serialization methods.

The process of saving a solution item is more simple: just an invocation to the OnSave() method.

The Project has its own implementation of OnLoad() and OnSave() that does everything required to load and save projects from/to MSBuild project files. Subclasses of Project and project extensions can further customize the serialization behavior.

The OnLoad() implementation of the Project class loads the project information following this sequence:

The OnSave() implementation of the Project class loads the project information following this sequence:

The Project class has a ProjectProperties property of type IPropertySet which can be used to read and store custom properties. Those properties will be written to the MSBuild file.

The ProjectConfiguration class also has a Properties property. In that case, properties will be stored in the MSBuild PropertyGroup bound to the configuration.

The ProjectItem class has a Metadata property. Properties stored there will be saved as metadata of the MSBuild project item.

The methods for setting values are defined in the IPropertySet interface. This is a summary of the methods:

Those attributes can be used in any subclass of the following classes:

Solution serialization behavior can be customized by implemnting a SolutionExtension subclass and overriding OnReadSolution and OnWriteSolution. The provided SlnFile instance can be used to read and write data to the solution file.

Automatic property serialization is supported as described above. However, for automatic serialization to work the SolutionDataSectionAttribute attribute must be applied to the SolutionExtension subclass. This attribute taks the name of the custom data section as first argument. For example:

The solution extension properties could end being serialized in the solution file like this:

The Project Model already implements support for loading solutions and workspaces. If you are implementing your own WorkspaceItem subclass, you need to implement serialization support for it.

The first step is to implement a WorkspaceObjectReader subclass. This class will be in charge of loading the bits from the file that contains the workspace item. It has the following API:

The methods you need to implement are CanRead() and LoadWorkspaceItem().

Object reader implementations must be registered in the /MonoDevelop/ProjectModel/WorkspaceObjectReaders extension point. For example:

The save operation can be implemented by overriding the OnSave() virtual method of WorkspaceItem.

The general rule is that the project model is thread safe for reading but not for writing. Methods that modify the model must be called in the UI thread, other methods can be called by background threads (unless otherwise specified).

Any WorkspaceObject subclass can be in two states: Shared and Not Shared. Objects in Shared state can only be modified in the UI thread. This is ensured by calls to AssertMainThread() in methods that modify the object, which will throw an exception if the method is not called from the UI thread.

Objects in Not Shared state are still not thread safe for modifications, but thread access is not checked, so it is up to the object creater to decide how to ensure that only one single thread is modifying the object at a given time.

By default (when instantiated), objects are in Not Shared state. The state can be switched to Shared by calling SetShared() on the object. There is no way to transition back. When an object switches to Shared, the OnSetShared() virtual method is called, both in the object and all its extensions.

Project and solution loading is done in a background thread, so they are in Not Shared state during all loading process. Once they are fully loaded, they are switched to Shared state.

Methods that may take long time to execute are exposed as async methods. Continuations of async methods will be executed in the calling context.