Windows is now an officially supported platform for running MonoDevelop. Many Windows specific issues have been fixed, and some add-ins such as debugging and subversion support have been written specifically for Windows. See the Feature Matrix for more details about which add-ins are supported in Windows.

We are releasing a new Windows Installer which includes almost all you need to run MonoDevelop. The only external dependency is Gtk#, which is provided in a separate installer. 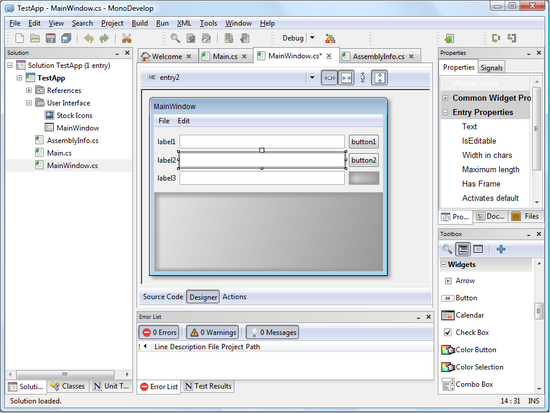 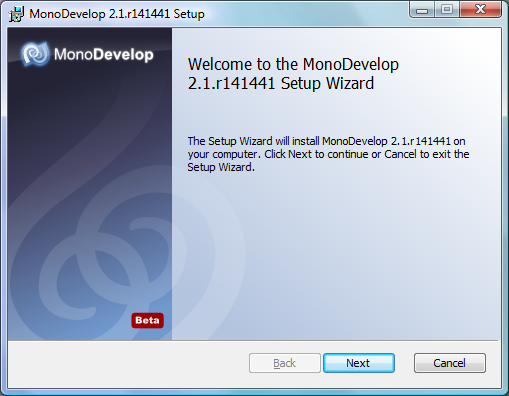 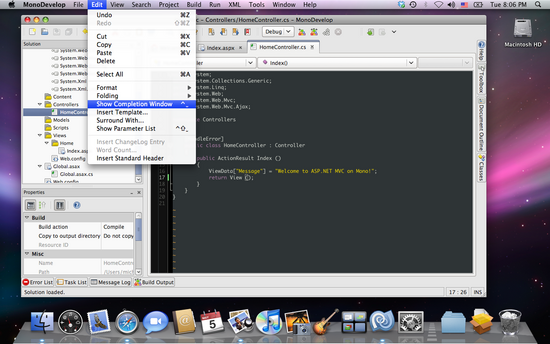 Mac OSX is also now a supported platform. MonoDevelop has been adapted to Mac OSX in many ways. For example, keyboard shortcuts follow the OSX standard, and the main menu is replaced by the global Mac menu. In addition, a large number of Mac-specific, mainly GTK-related bugs have been fixed. See the Feature Matrix for more details about which add-ins are supported in Mac OSX. 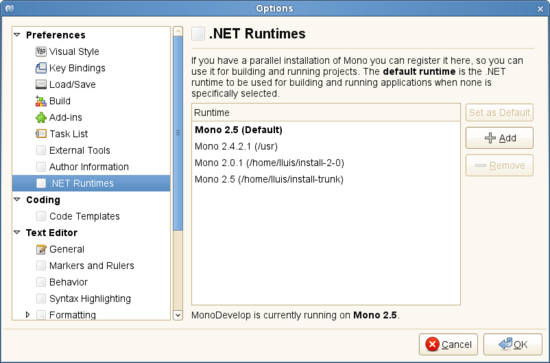 Text file formatting settings can now be specified per file type. Formatting information is stored in the project file, so it will be the same for all programmers of the project. 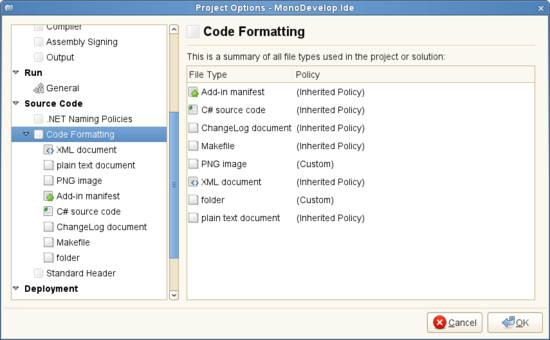 The new Run With menu allows running a project using a special execution mode. Execution modes can be provided by add-ins (for example, a debugger or a profiler), and can be customized by the user (for example, it would be possible to define a custom mode which runs a profiler with a set of user defined options). 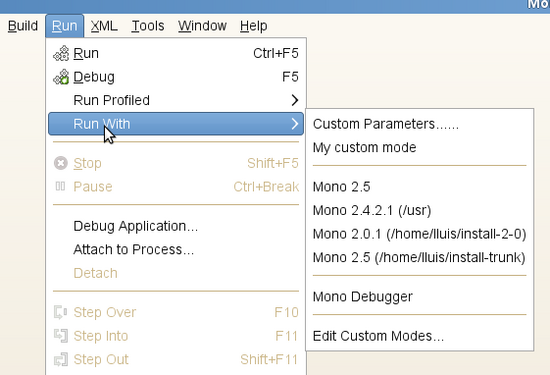 Global Assembly Folders
It is now possible to specify a set of folders where MonoDevelop should look for assemblies when resolving project references. This set of folders is also used to look for .pc files. This simplifies the development of libraries (such as add-ins) that need to be linked to applications which are not installed in the system. Custom folders can be specified in the Preferences -> Build options panel. 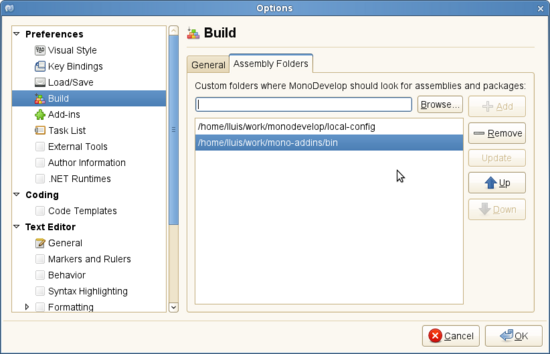 Delete Project Dialog
When removing a project from a solution, MonoDevelop now presents a dialog which allows deleting all or part of the project files from disk. 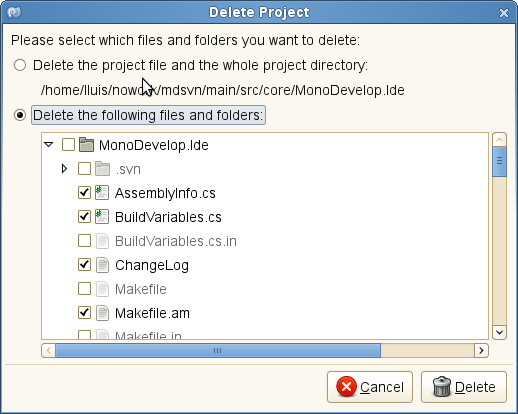 Dropping Files From Nautilus/Explorer to the Solution Tree

Drag & Drop of files between the file manager and the Solution tree is now supported. This can be used to add files to a project.

When reloading a project (for example, due to changes externally done in the project file), MonoDevelop doesn’t need anymore to close the open files.

MonoDevelop now has basic support for building and running applications on .NET 4.0 (this will require Mono from SVN or the .NET 4.0 beta framework on Windows).

MonoDevelop now keeps a copy on disk of all edits done in a file, even if the file has not been saved. In case of a crash, a file recovery dialog is shown which allows restoring unsaved changes.

Block selection in the editor is now supported by pressing Alt while selecting text. 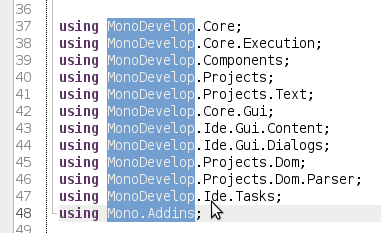 When hovering over a fold region, the corresponding area of code will be highlighted to make it easier to identify among all the code regions.

The editor is now much faster and will be more responsive when editing large files. 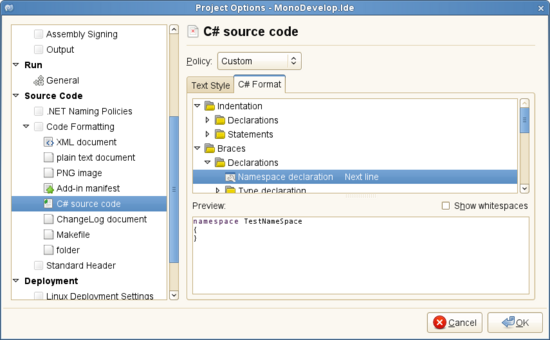 When the ‘on the fly code formatting’ option is enabled, MonoDevelop will automatically format blocks of code following the formatting options set in the project. This feature is still in beta status and disabled by default.

The Code Completion window now supports acronym matching. This is useful for completing long identifiers. For example, a method name such as ChangeCurrentPageArgs can be quickly selected by just typing ‘ccp’. 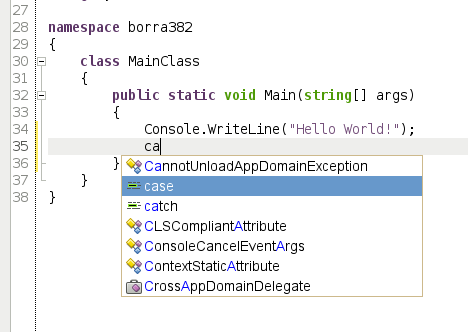 Documentation written in the code using the XML documentation format will now be shown in the Code Completion window. 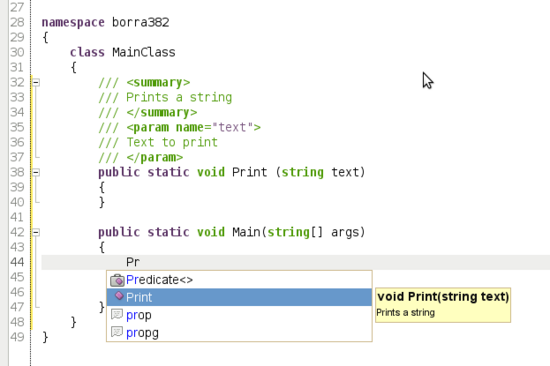 The vi Mode support has been improved with several new commands.

The new Dynamic Abbrev command (bound to Alt+/ by default) emulates the command of the same name available in Emacs. It is a simple form of autocompletion that cycles through matching words in all the open text editors, and is useful for documents that do not have full autocompletion support.

The ‘Show Code Generation Window’ command (Alt + Insert by default) allows quickly generating snippets of code based on the current context. Here are some examples: 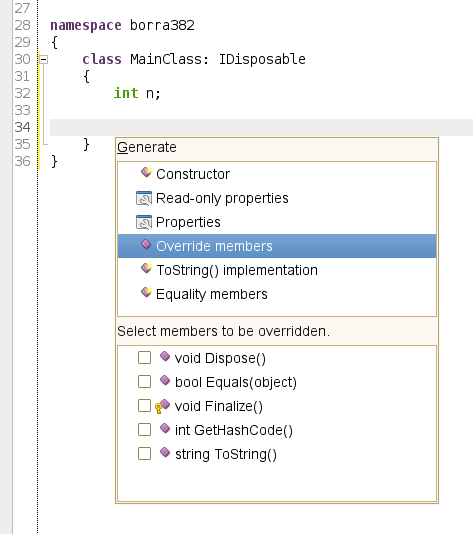 Generates a method out of a block of code. It will automatically add the required parameters, based on the variables being used in the block of code.

When applied to a expression, declares a local variable which has that expression as value.

When applied to a variable, replaces all variable references by the initialization value of the variable. It is the reverse of Declare Local Variable.

Creates a constant field for the selected constant value.

Move Type to Own File

When there is a file with several classes defined of it, it allows quickly moving a class to its own file, keeping the required ‘using’ declarations.

Title says it all. Removes using declarations which are not required in a file.

Several refactoring and navigation commands can now be bound to keyboard shortcuts, including Rename (F2), Go to Definition (F12), and Find References (Shift-F12).

T4 support is provided by the new Text Templating addin, which includes a T4 engine and editing features, such as syntax highlighting and outlining support for .tt files, and the ability to jump to compiler error locations when executing a .tt file. A command-line T4 tool is also included, TextTransform.exe, which emulates the Microsoft tool of the same name. 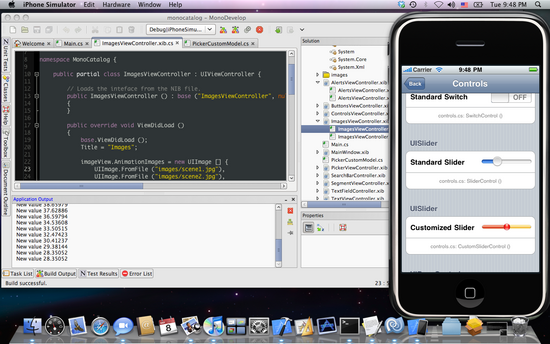 The Mac release of MonoDevelop includes an iPhone development addin. Although it requires Novell’s commercial MonoTouch product to develop, build and run iPhone applications, the addin itself is open-source. The iPhone addin includes

The Moonlight addin, which was first previewed in MonoDevelop 2.0, should still be considered an alpha-quality release. However, it is now able to build applications against a local SDK bundle. This is included in the Mac release, and on other platforms can be specified using the MOONLIGHT_2_SDK_PATH environment variable.

NOTE: the iPhone addin is known to interfere with the Moonlight addin’s “Add references” listing at this time. This will be fixed in an upcoming release of MonoTouch.

The Python Binding has been greatly improved, and we are releasing it as an official MonoDevelop add-in for the first time. Here is a summary of the features supported by the add-in: 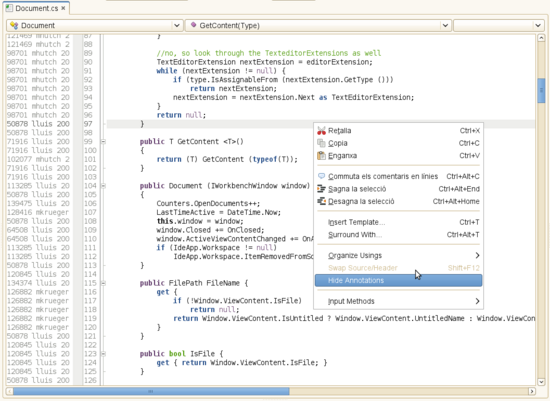 The Show Annotations command makes it easy to see which lines have been changed by who. This operation is available as a command in the Version Control context menu, and it is also available in the context menu of the text editor (so you can show annotations for any open file).

When the Review Changes view shows the diff of a file, it is now possible to double click on a line of the diff to jump to the source code of the file.

The new Create Patch command creates a patch including all the changes of a directory. If comments for files have been entered, the patch will include the required changes in ChangeLog files.

The results view of the Find in Files command now uses syntax hilighting when showing the matching lines of code.

The database add-in is now more stable and there is a new syntax mode for SQL.

The Go to File dialog now supports multi-selection. When clicking on OK, all selected files will be opened in the IDE.

When creating a tarball package, it is possible to specify a set of switches which can be enabled at configuration time.

This release features improved code completion, support for the quick finder, and support for Vala 0.7.0.

Code completion in the C/C++ addin is now more reliable.

The following matrix shows which features are available for each platform. MonoDevelop features not shown in the list ara available for all platforms.