The main window now has a darker background, with some subtle shading effects. The pads look more physical and better delimited. The pad toolbars are now integrated in the docking system, improving the overall visual consistency.

There is a new configuration option for selecting the desired level of compactness of the GUI. There are five levels, from Very Compact to Very Spacious. Depending on the level, some padding is added or removed. So for example, in the ‘Spacious’ level, there is some padding always visible between the pads, the window borders and the main menu. There is no such padding in ‘Normal’ mode. 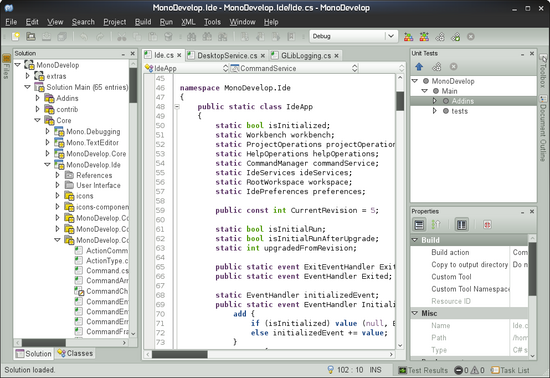 Results pads such as the Error List, logs for Version Control or Find in Files operations are now shown in autohide mode by default, and the buttons to activate them are now placed next to the status bar, saving some valuable visual space. Until now, those pads were shown docked at the bottom, taking space from the text editor. 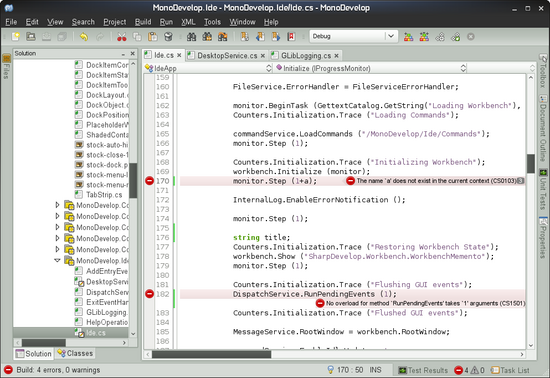 The compiler/error management workflow has been improved in several areas to make it easier to browse through errors and warnings:

The look of the New Project and New File dialogs have been improved, and now they have a section for recently used templates. 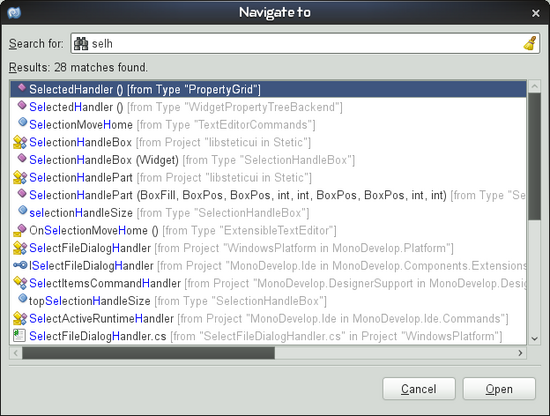 The new Navigate To dialog allows quickly finding and jumping to files, types and type members.  The new shortcut for displaying the dialog is control+,. The search algorithm supports acronym matching and tries to find the best match, not only by searching substrings, but also by splitting the search string in several parts and trying to match them through all the words that compose the string being checked.

MonoDevelop has an option which allows choosing the font to use for the tree view pads such as the Solution pad or the Class pad. Those tree views may be large for big projects, so users find it convenient to use a small font, which allows seeing more information at once. 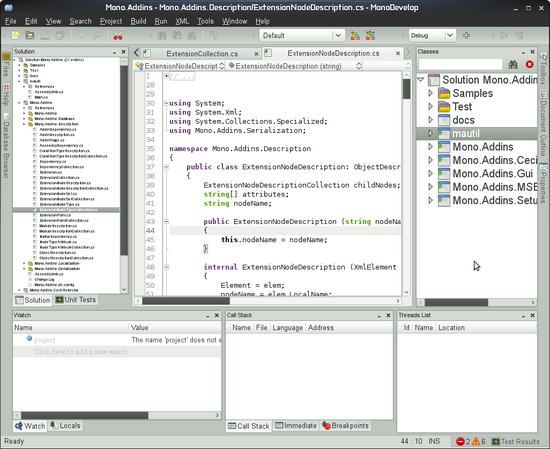 To make font reduction easier and more handy, a new Zoom capability has been added to the tree pads. So to zoom, all you have to do is hold the Control key and move the mouse wheel up and down (the standard zoom shortcuts can also be used for this, including Control+0 to reset the zoom). 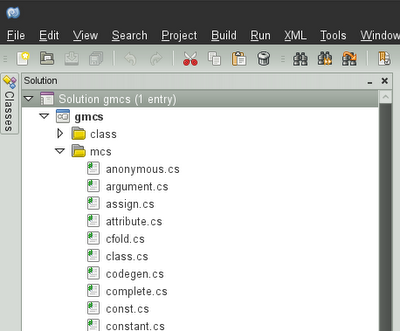 MonoDevelop now supports loading an executable assembly as a project. Such projects can be created by directly opening a .exe using the File Open command or by adding the .exe to an existing solutions. Also, MonoDevelop will get the list of source code files from the debug info of the assembly (when available).

Console projects with the ‘Run in External Console’ option will now properly work on Mac and Windows.

Files can now be directly added to solution folders. This is useful to keep common solution files handy, such as documentation or data files which are not directly bound to a specific project.

Files from outside the directory of a project can now be added as a link in any project folder. In previous versions, such files where always shown in a single “External Files” folder.

Although not directly visible to the user, some important changes has been done in the project service to better support the new features of this and future releases. This includes an overwork of the project object model, improved support for MSBuild projects and other improvements. 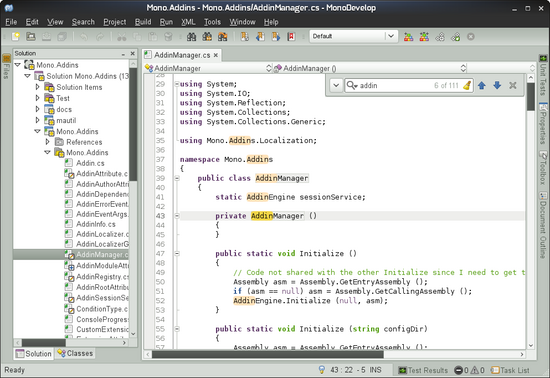 The search bar which was located at the bottom of the editor in previous versions is now replaced by a new animated popup bar, which makes a more efficient use of space.

The new search bar has improved handling of the case mode. New searches start in case insensitive mode. If an upper case letter is typed, the search automatically switches to case-sensitive mode, and remains in this mode from that point on (until the next search).

The code completion list has a new Group display mode. In this mode, members of a class are shown grouped below the class name that declares them. This mode makes it easier to locate members for classes with a large inheritance chains.

Group mode can be toggled by pressing control+space while the completion list is visible. The keys shift+up/down can be used to jump between groups. 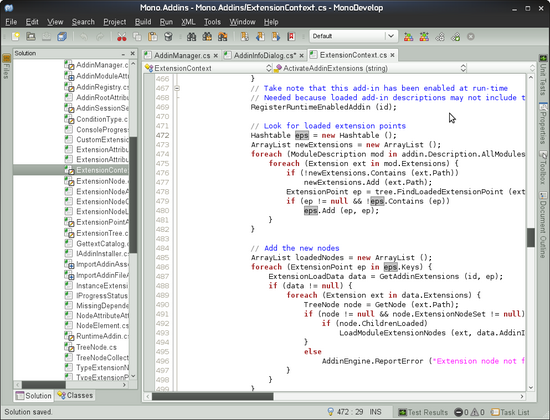 When placing the cursor over a symbol, MonoDevelop will now automatically highlight all usages of that symbol in the editor. The keys control+shift+up/down can be user to jump between symbol instances.

The Block Selection mode now supports editing. When a block of text is selected and some text is typed, the text will be added to each line of the block. There is also a new command for toggling between normal and block selection mode. 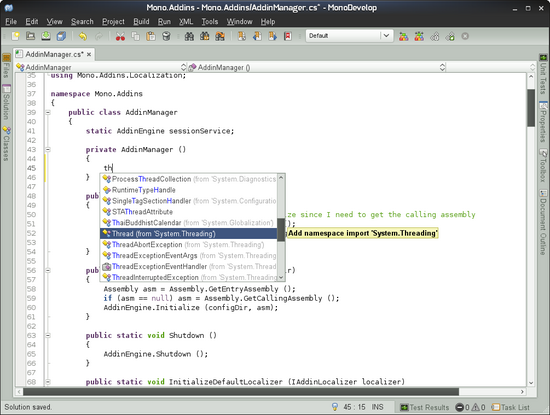 When pressing control+alt+space, MonoDevelop will show a list of all types available in the project and its references. When a type is selected, the name will be completed and the required namespace will be added to the usings list (if not already there).

Lines of text can be moved up and down by pressing alt+up/down. When moved inside or outside a code block, line indentation will be properly updated.

There is a new command for toggling the Code Focus mode (the default shortcut is control+shift+k). When enabled, the editor will be shaded according to the current cursor position.

The quick fix command alt+return can be used to fully qualify a type name or add its namespace to the usings list.

The tooltips that are shown when hovering over folded regions can be focused with shift+space and scrolled.

The filtering in the completion list now matches midway through words, making it easier to find unknown or misremembered items. It now uses your previous choices to improve the default selection. 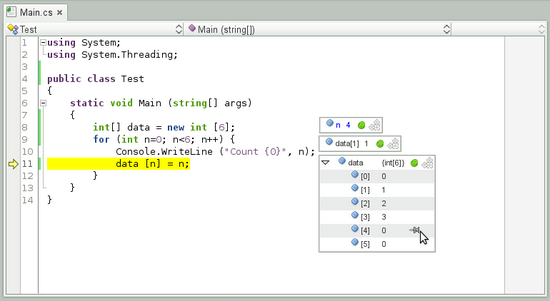 Debug value tooltips can now be pinned into the text editor. To do it, just move the mouse over a symbol, and when the value tooltip is shown, move the cursor over the tooltip and click on the Pin button. When inspecting a class instance or an array, it is also possible to expand it and pin one of the members.

MonoDevelop also supports Live Pinned Watches. This feature can be enabled by clicking on the Live Update button of a pinned watch. When this mode is enabled, the pinned watch will be updated when the value changes while the application is running.

Basic support for debug value visualizers has been added. A new ‘zoom’ button is now shown for values which support custom visualizers. Right now there are visualizers for String and Gdk.Pixbuf, and we plan to support more visualizers in future releases.

Evaluation of expressions in the watch pad and the immediate pad has been improved and now supports more C# constructs. This is especially noticeable in the Win32 backend.

When an exception is thrown or uncaught, MonoDevelop will now show a dialog with information about the exception object. 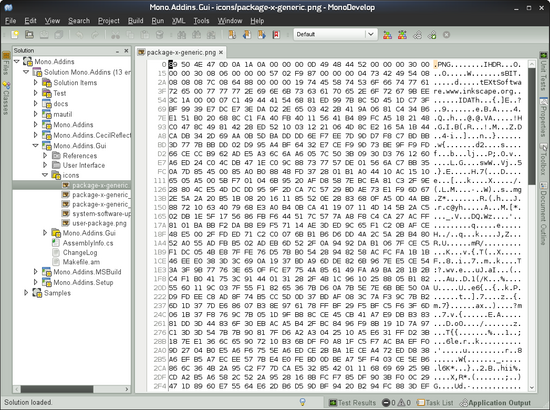 There is now a file template for creating T4 text templates, and T4 templates are automatically compiled and run when they are saved.

The Code Metrics tool can now calculate the Cyclometric Complexity and Class Coupling of projects and solutions. The results view has also been improved and it now shows the results grouped by project.

There is code completion for C# regions in ASP.NET pages. 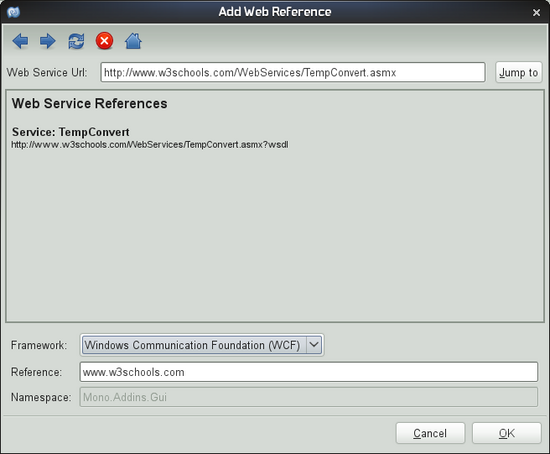 The Add Web Reference command now supports adding references based on WCF. When adding the reference, and new combo box allows selecting the target framework, which can be WCF or .NET 2.0 Web Services.

The NUnit add-in has some minor but important improvements:

The MonoTouch addin now supports iPhone SDK 3.2 and 4.0, including iPad/Universal apps, and has more project and file templates.

The Run->Run With menu can now be used to run applications in different versions of the iPhone Simulator, and the default simulator version can be set using the Project->iPhone Simulator Target menu.

Some improvements in the Mac OSX port:

The Vala completion engine has been reworked, replacing the out-of-process VSC-based completion with the more accurate and responsive libafrodite.